Mait Palts, CEO of the Chamber, acknowledged the company’s contribution to the development of the industrial field while presenting the award to Georgi Grigoryan, Chairman of the Elme Metall’s Board.

“Outstanding achievements such as this one are only possible on account of the effort invested by the close-knit team of Elme Metall, with its representatives in Estonia, Latvia, Lithuania, Finland and Poland, and of many reliable customers and partners,” claimed Georgi Grigoryan.

A total of 1826 Estonian businesses and enterprises participated in the contest this year, including 383 wholesalers.

The ranking is drawn up by the Estonian Chamber of Commerce and Industry together with the Estonian Institute of Economic Research (EKI), which runs technical calculations and assists with drawing up ranking charts in cooperation with the International Institute for Management Development in Lausanne. The rankings are drawn based on companies’ performance indicators for the last two years, including sales revenue, net profit, labour costs, equity capital, and annual average number of employees.

This year, using data submitted by the contestants, the institutions above calculated respective rankings in thirteen areas of economic activities, taking the company size into account. 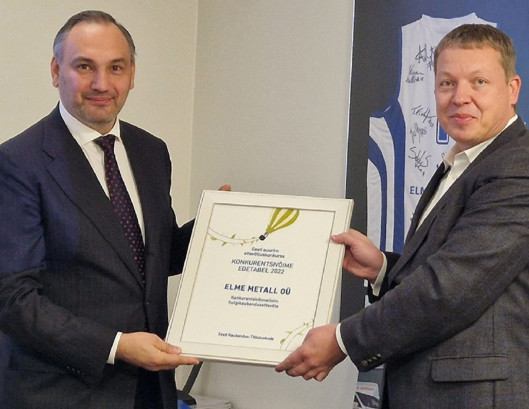